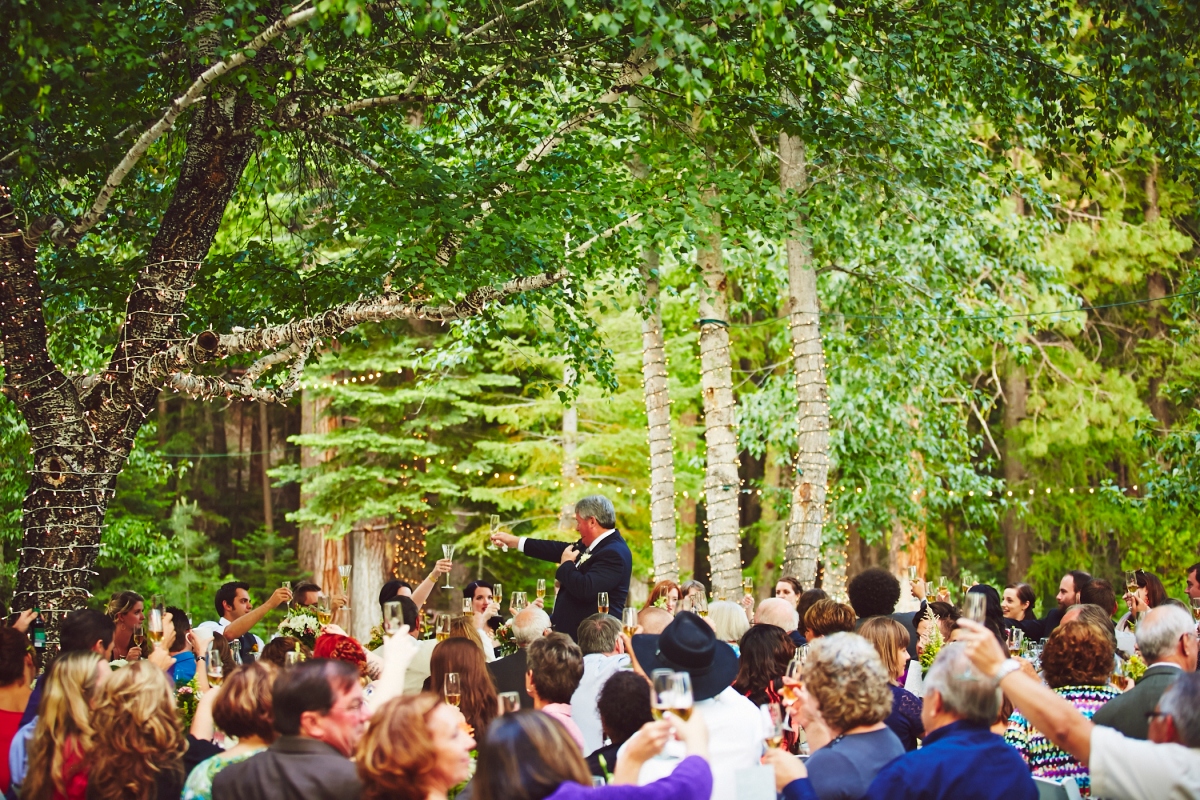 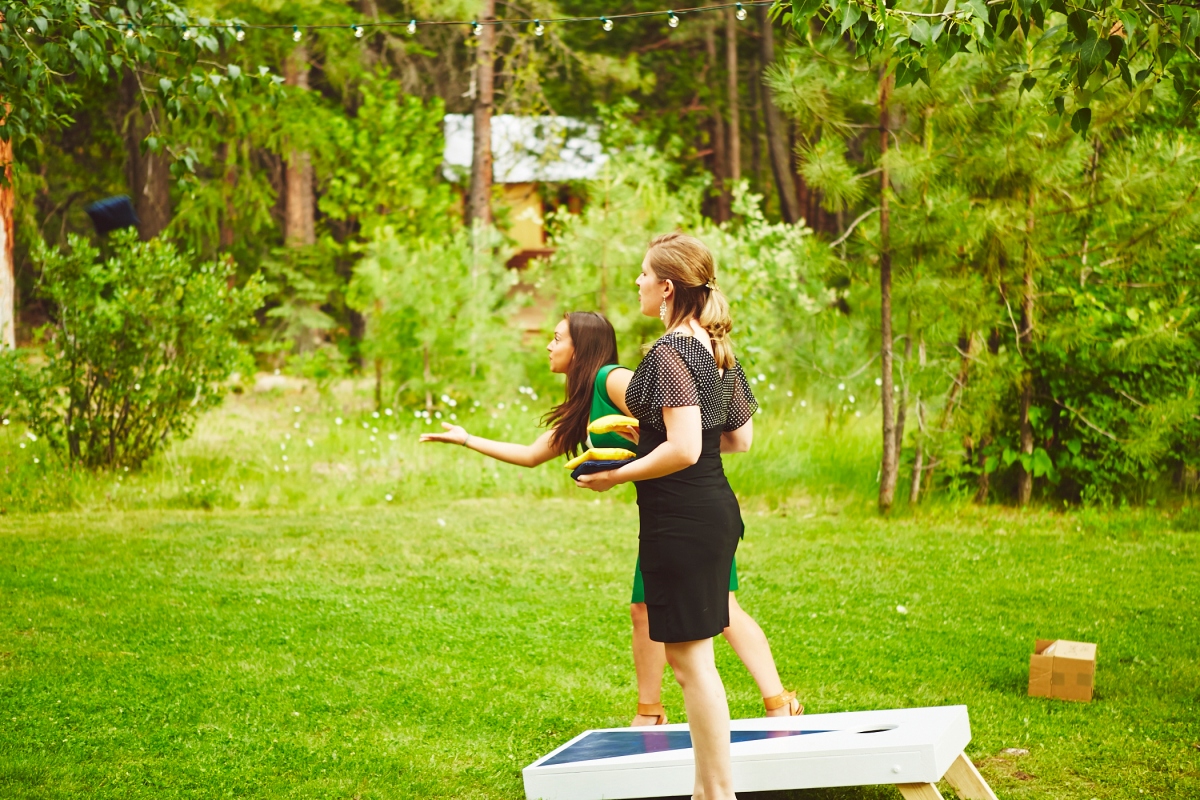 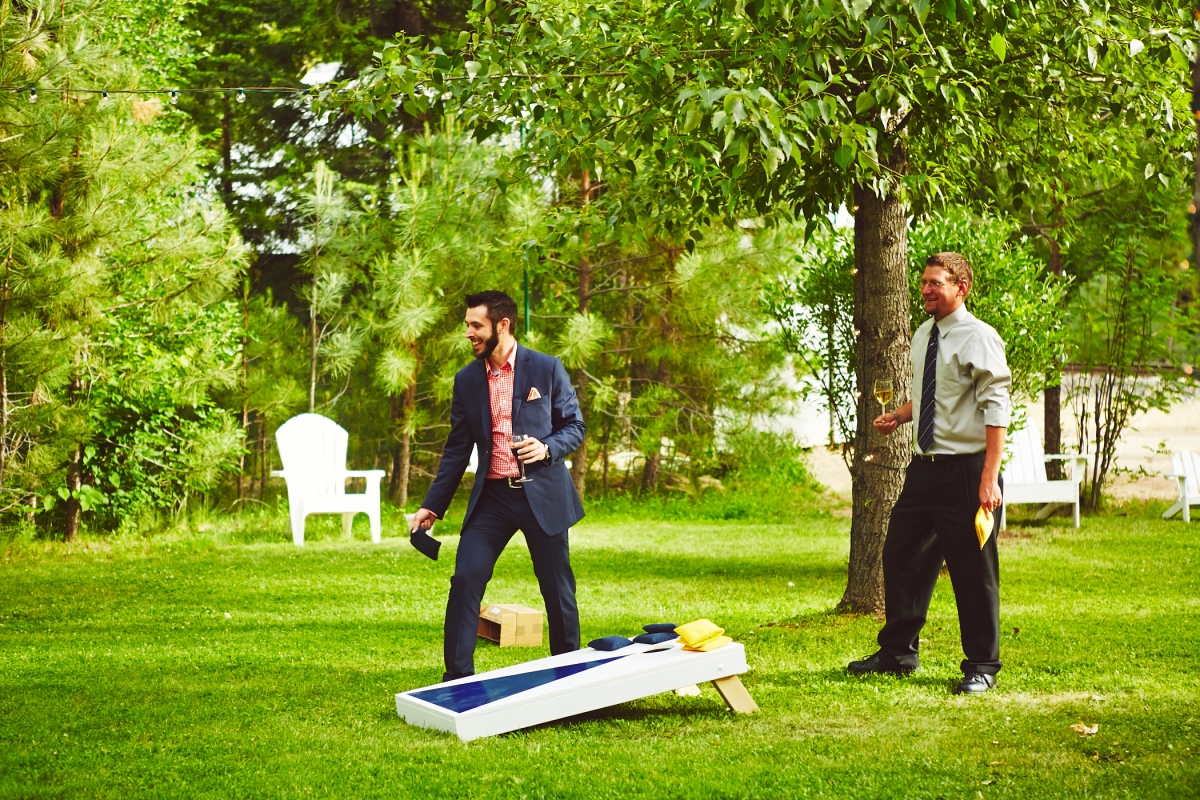 While Jonathan and I were off taking photos, our guests  ventured around the corner from the ceremony for cocktail hour. The cornhole court was set up and the bar was open! 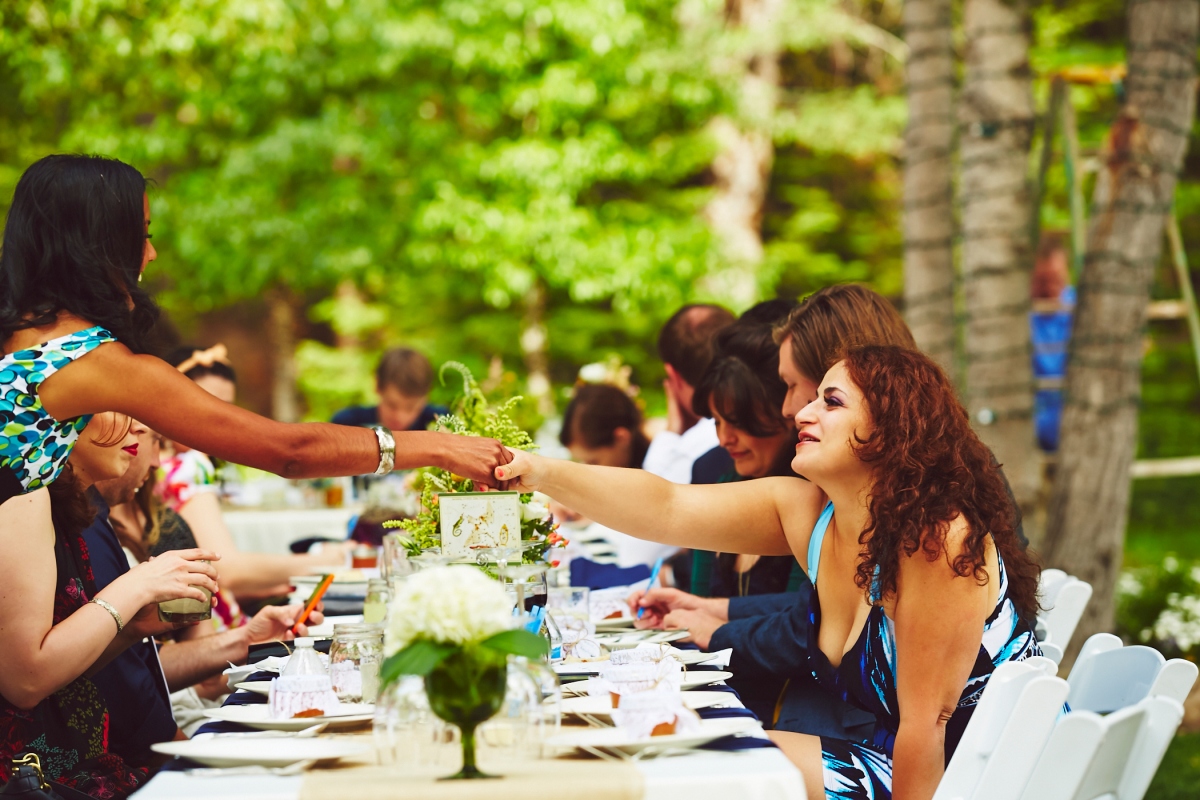 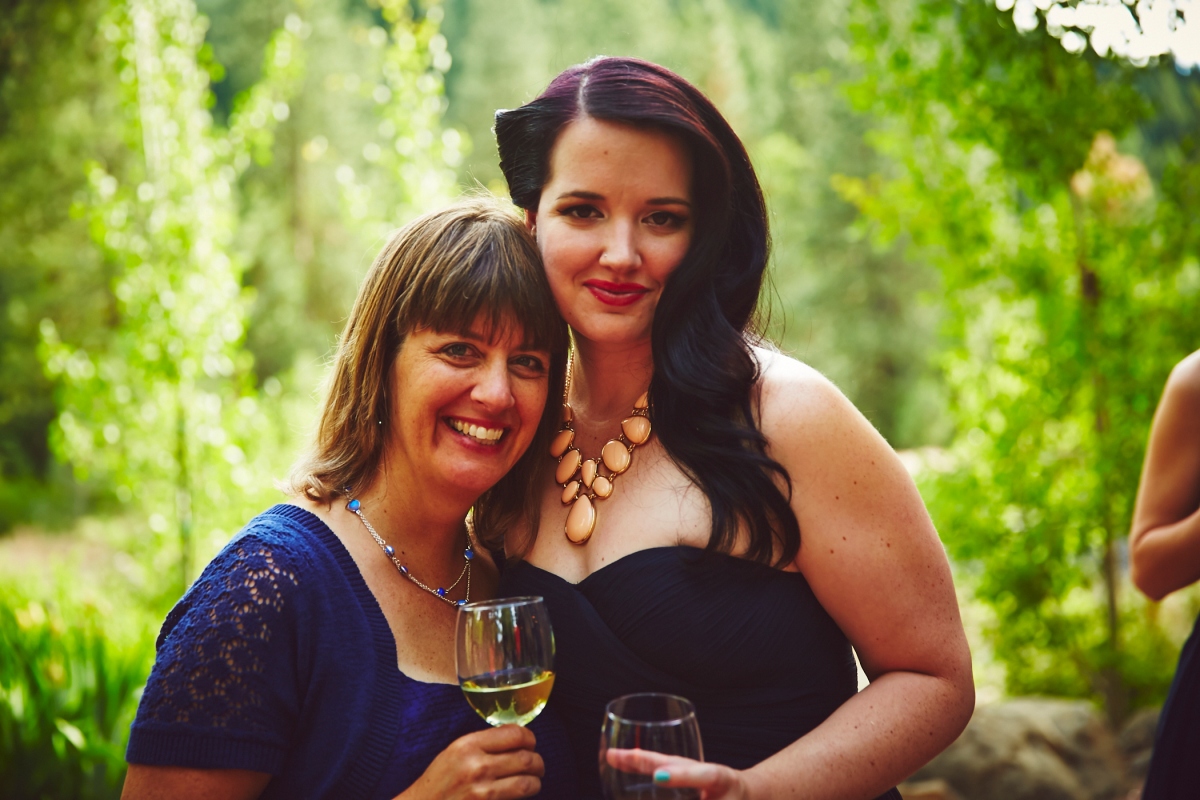 We were able to finish pictures in time to join our friends for a drink before dinner got started. 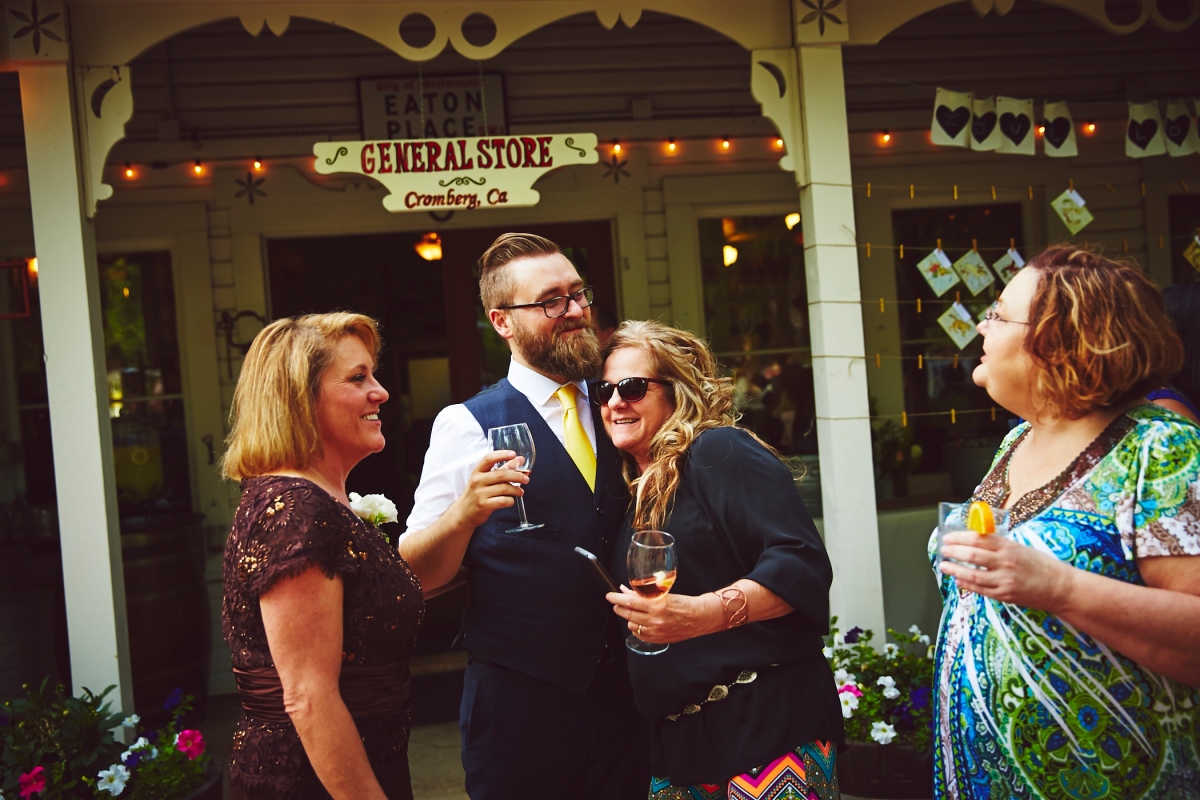 Cocktail hour came to a close and everyone took their seats for dinner.

We chose to do a buffet and worked with local caterer Southern Accent who were amazing! (They also did our rehearsal dinner, late night snacks, and morning-after breakfast.) We did served tri-tip, honey ham, green beans with herb butter, and lime couscous with summer veggies.

While everyone was still eating, we started on the toasts. 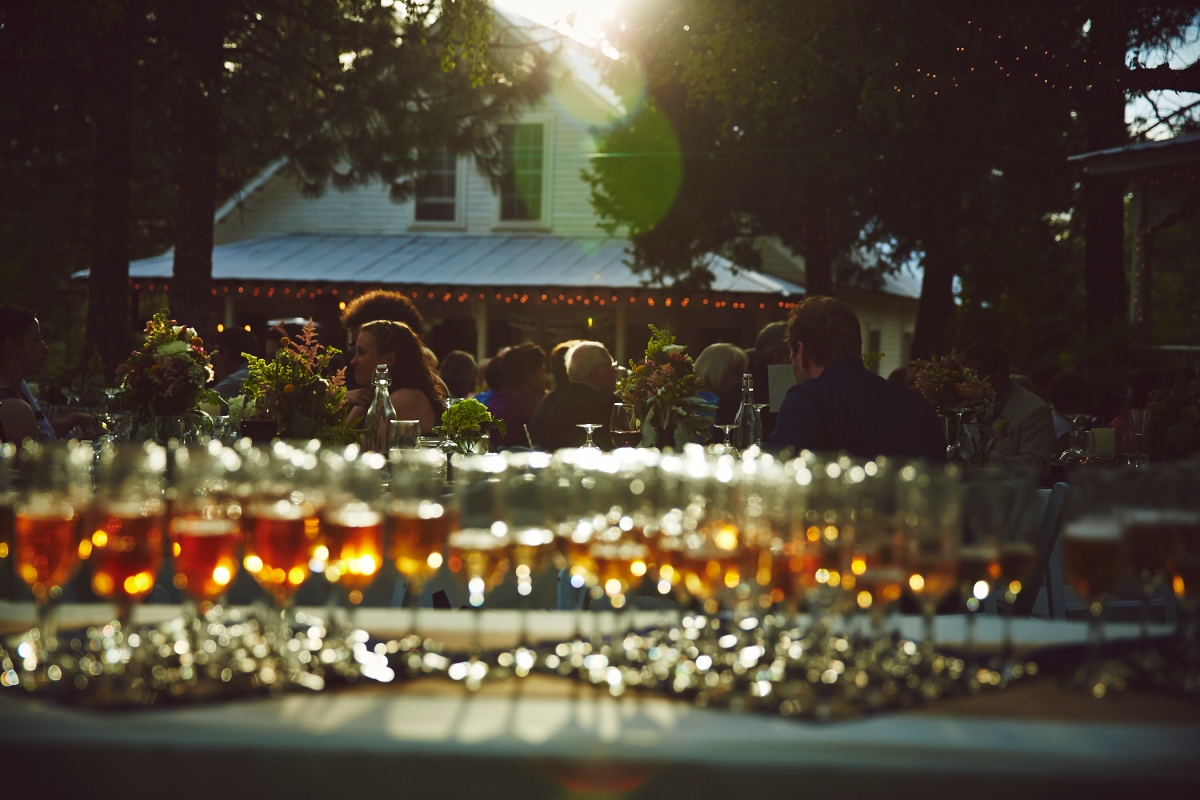 My Matron of Honor, Cassie, spoke first and she was hilarious!

She said her speech had been written years ago (with Daniel Day-Lewis in place as the groom!) and told the story of when she asked Jonathan if he “like-liked” me while I was sleeping on a couch in college right next to them — back when he and I were just friends (who flirted a lot). She revealed to everyone my big secret that I had definitely not been sleeping but I was really good at faking it!

Then Jonathan yelled “I KNEW IT!” Ha!

Then Martin, Jonathan’s Best Man, gave the sweetest speech. These guys have been like brothers since middle school, and Jonathan being an only child really pushed him to make incredible friends. Truly family. 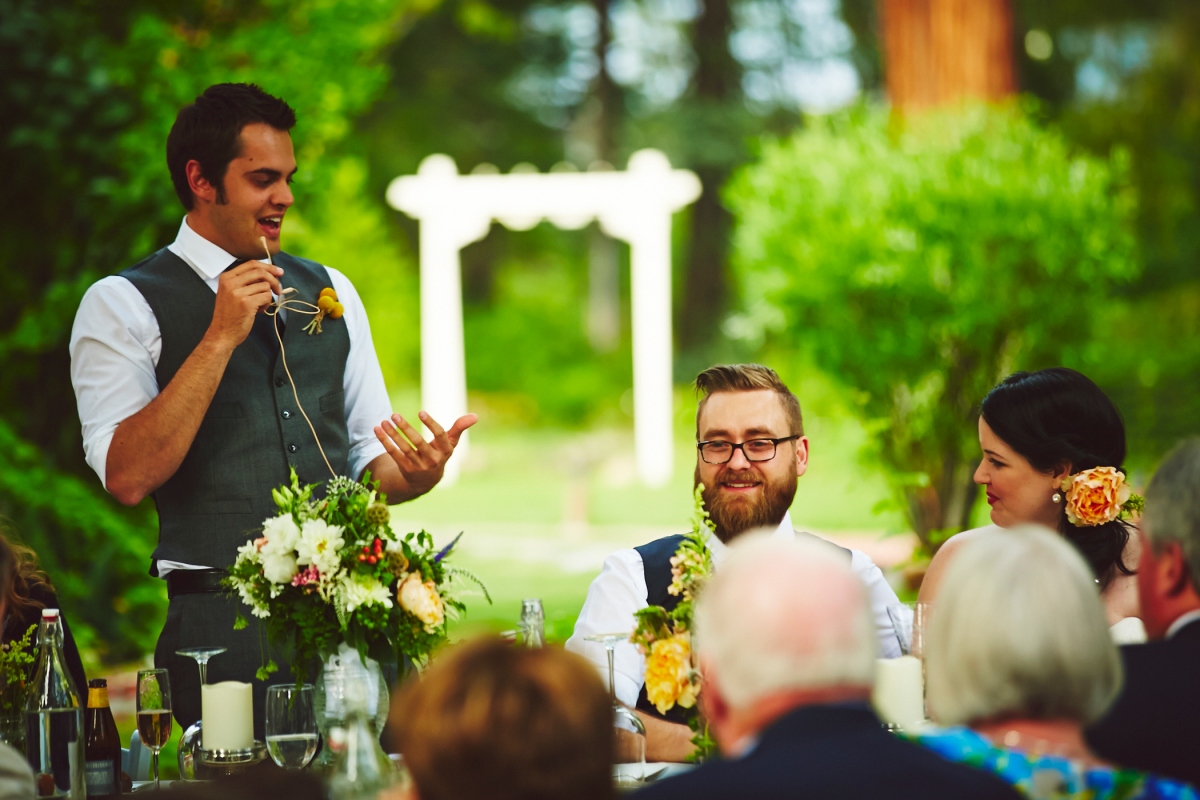 Next up Kim, my Maid of Honor, improvised her entire speech — and SHE. KILLED. IT. It was funny but intensely personal and moving. I was a mess! 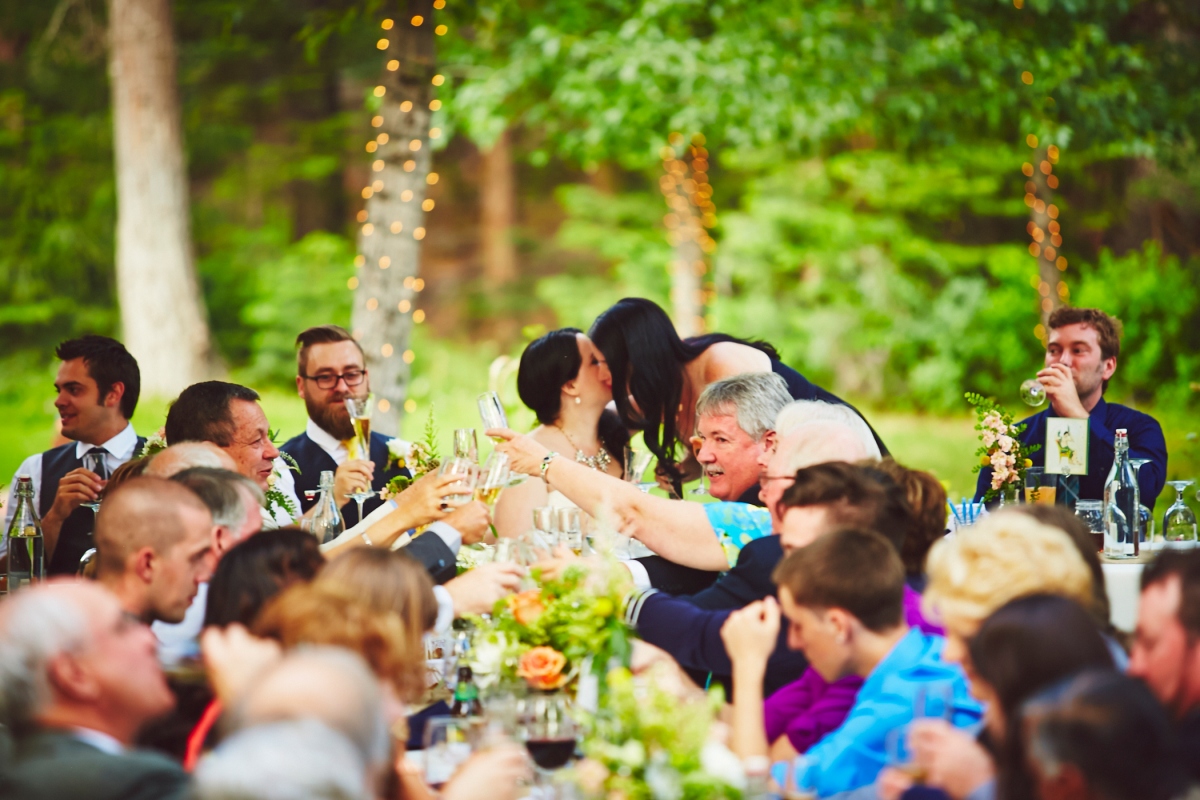 My dad closed out the toasts with one of his own. As essentially the “host” of the evening, he was able to thank everyone for taking the trek to be there, and the contribution they’ve all had on our lives. He spoke again about me and Jonathan, as my father, and his words meant more to me than I can say. 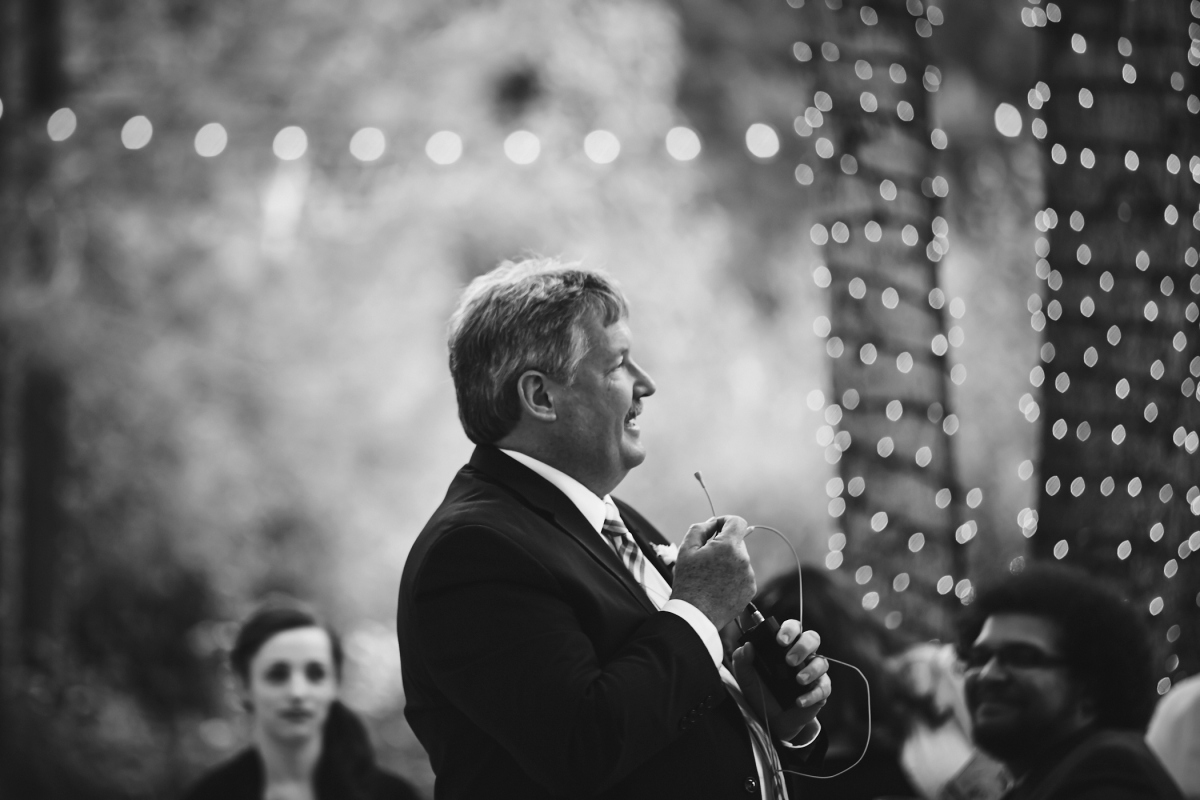 We coordinated it so immediately after my dad’s toast, he invited me onto the dance floor to do our father/daughter dance.

We danced to “Go” by Plumb, a song I’d had picked out since I was a teenager. There was a lot of crying from my friends — especially my bridesmaids! 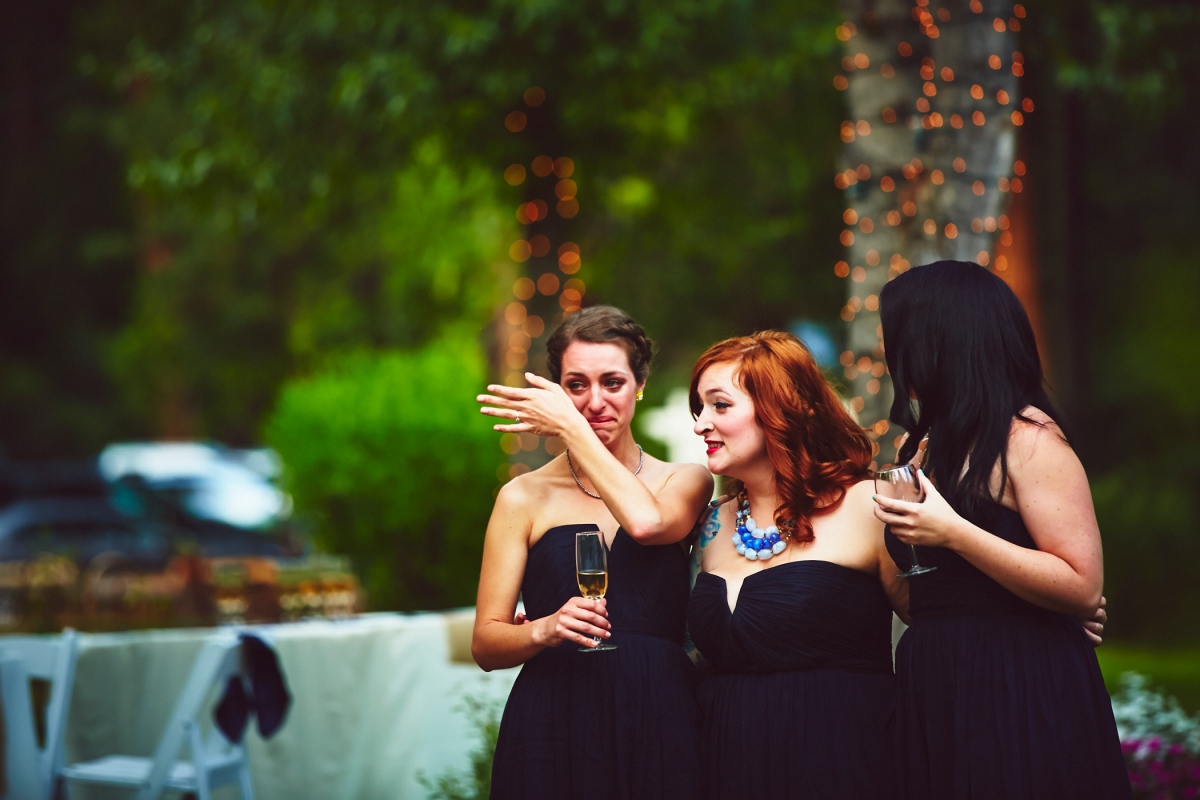 Jonathan and his mother were up next, dancing to “Heavenly Day” by Patty Griffin. 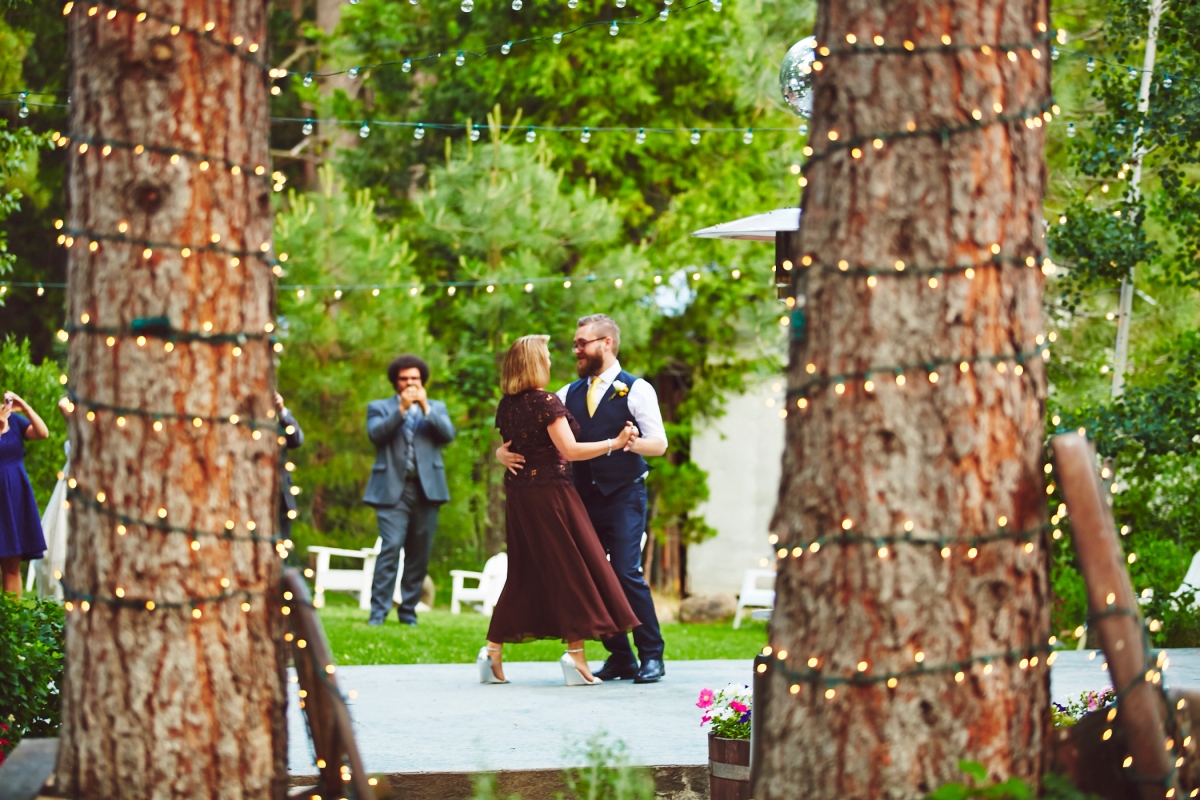 Finally, it was Jonathan’s and my turn to do our first dance. We chose “The Winemaker’s Love Song” by Tyler Lyle (shout out to my music-savvy MOH Cassie for finding this perfect gem for us) and in the middle of our dance, the day began its descent into night. It was magic. 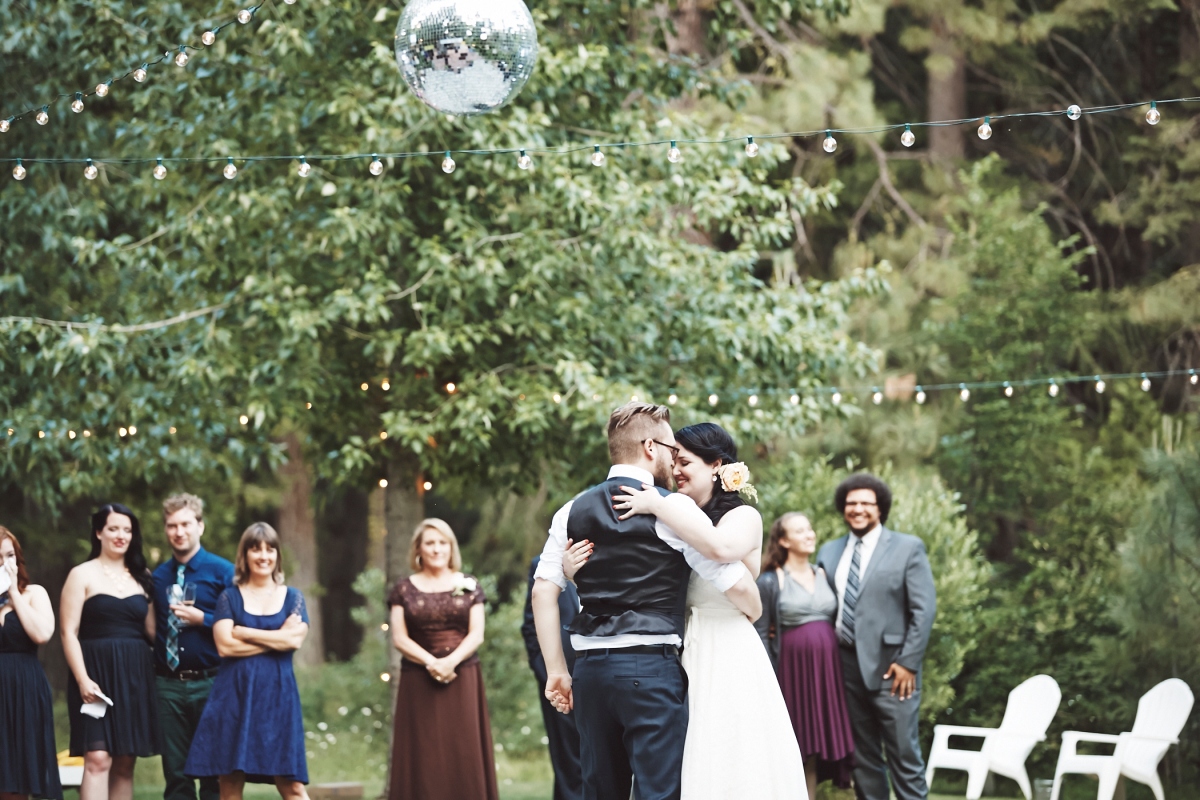 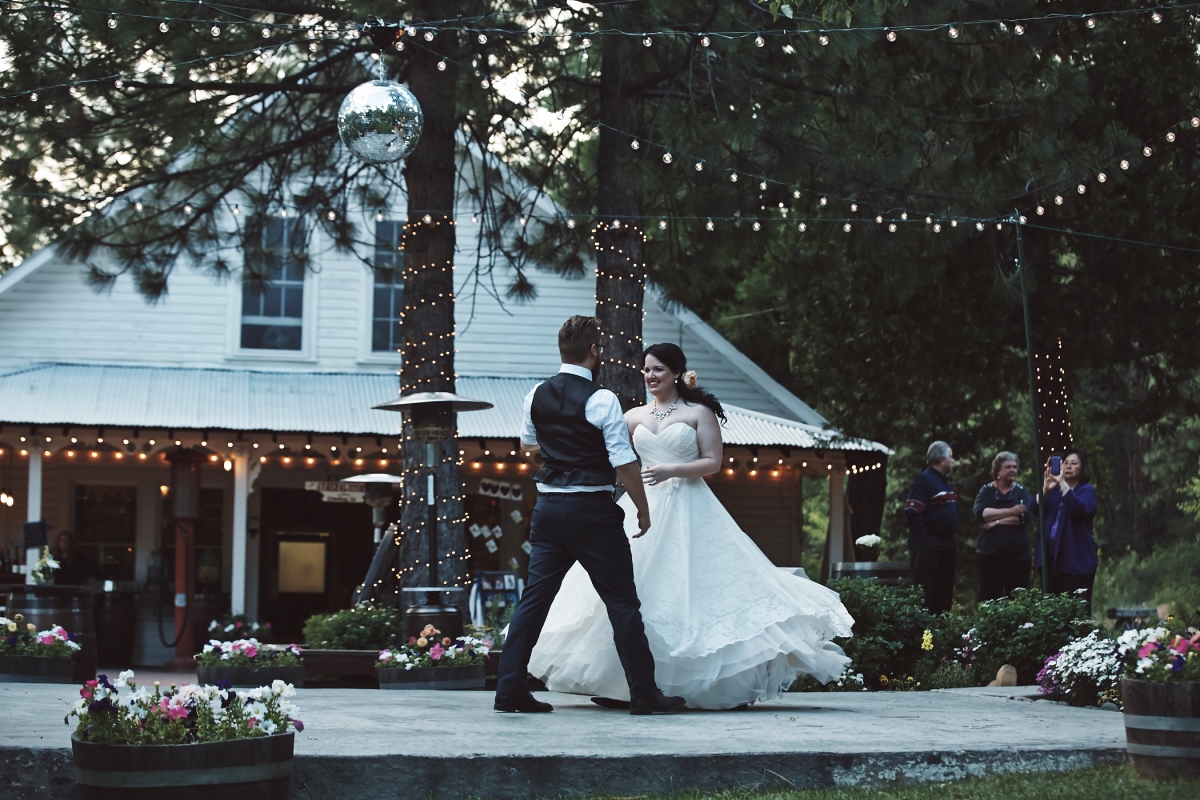 Our dance transitioned immediately into a big dance party… 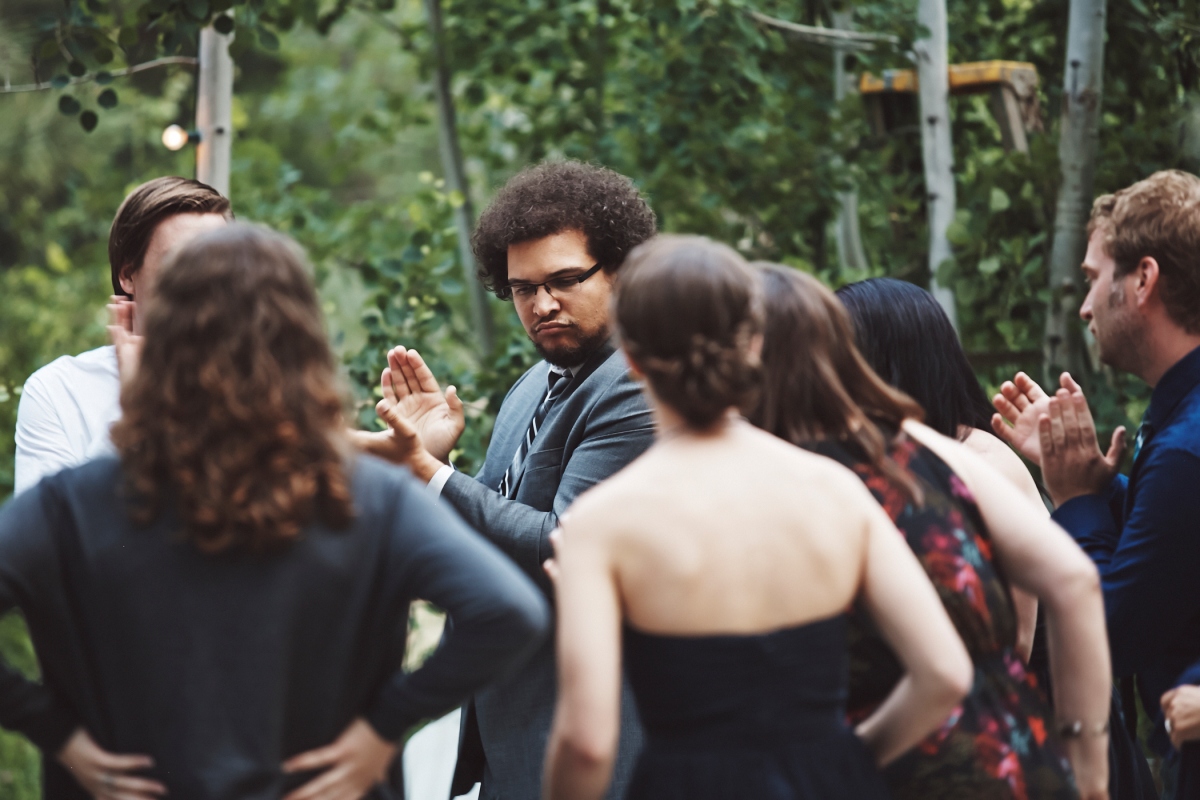 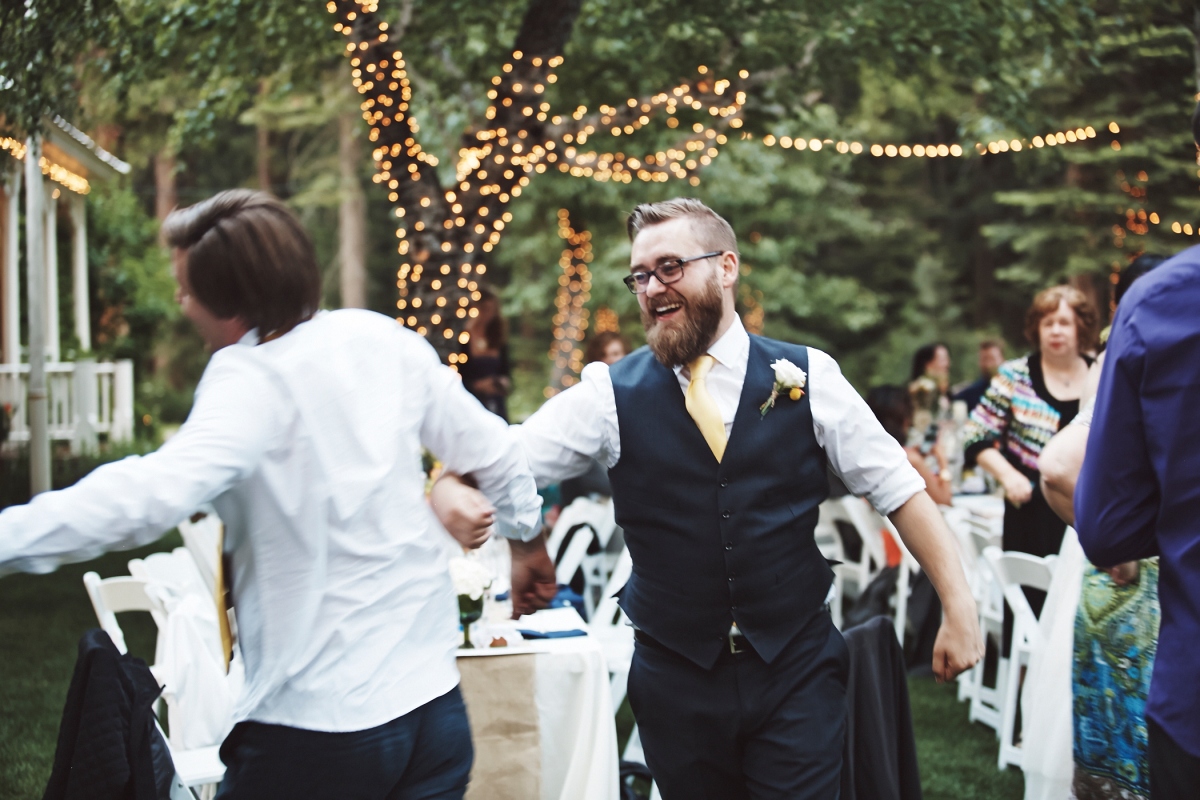 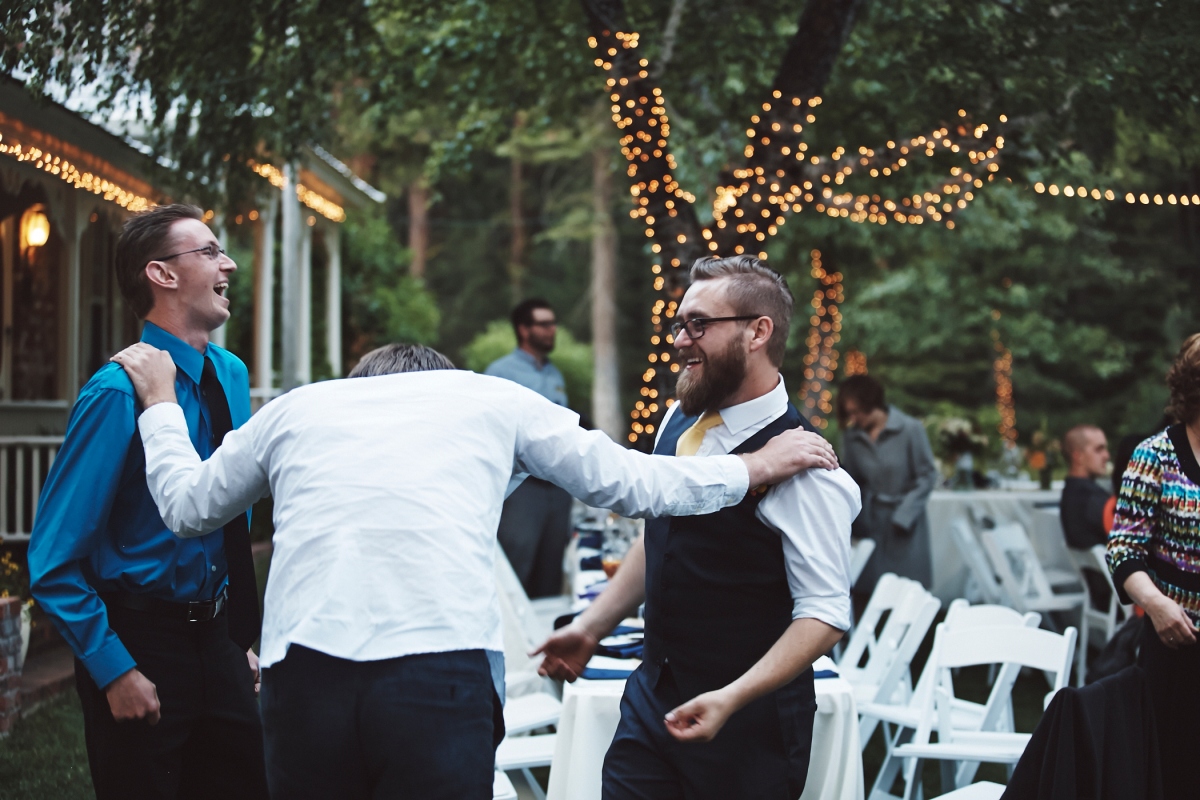 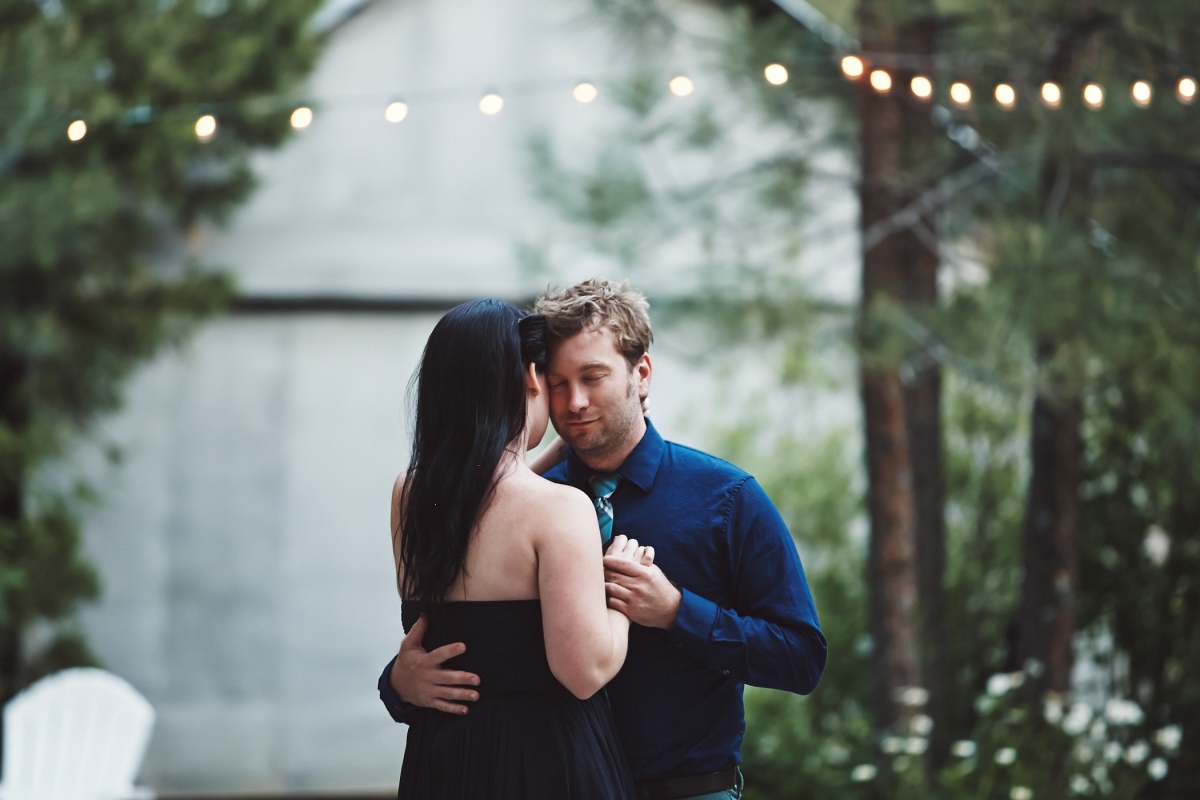 … and our guests were able to roam around and enjoy the reception with more drinks, food, a photobooth, and — by far the biggest hit of the evening — the whiskey bar!

It was set up near the photobooth and fire pit up the walkway from the dance floor, so it’s no surprise people congregated there. My dad hosted it with my Uncle Tom and he was in his element! 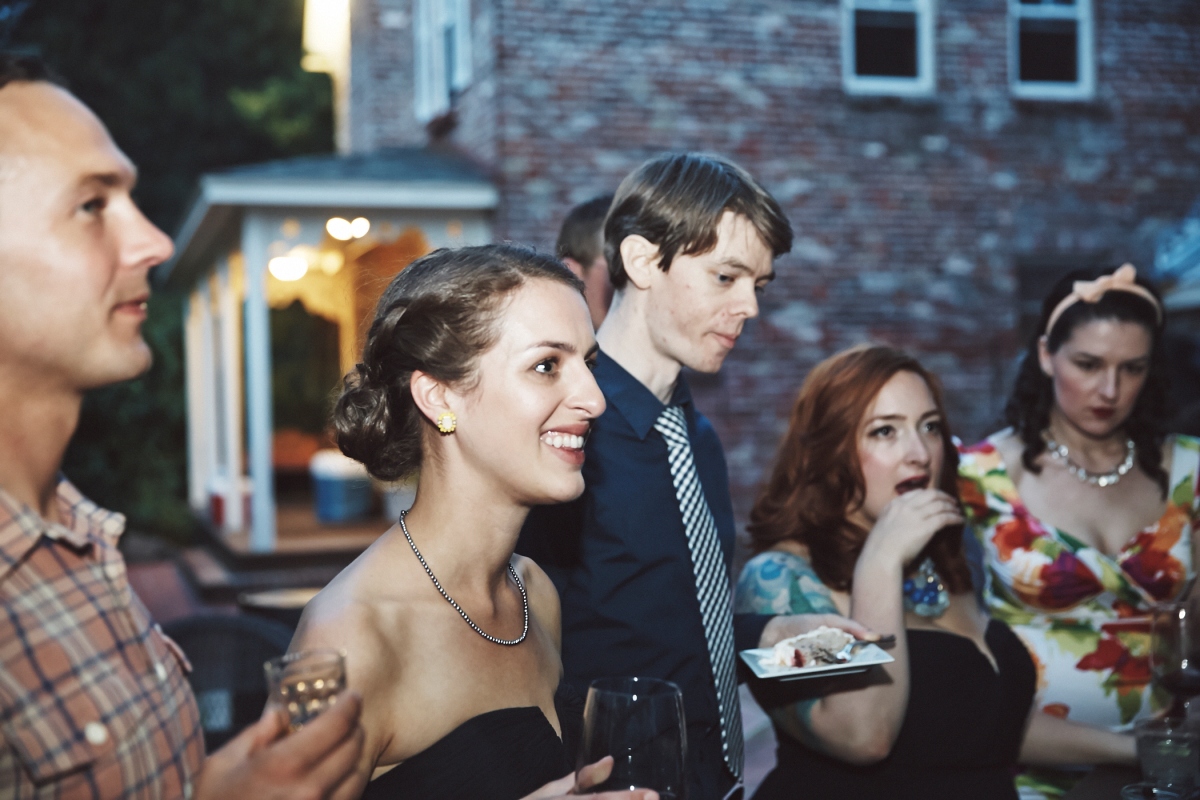 At a certain point, Jonathan joined them and started pouring drams of whiskey.

(Funny story: a sweet woman on the venue staff came up later in the evening and told me “Your husband has been pouring at the whiskey bar for over an hour — I tried to convince him to come and be with you but he still hasn’t come down!” I laughed so hard because that sounded about right!)

Before it got dark, we cut the cake. Jonathan and I aren’t generally cake people, but we’re glad we decided to have them anyway because they were delicious.

We had three separated tiers: one carrot cake, one strawberry lemon, and one vanilla. 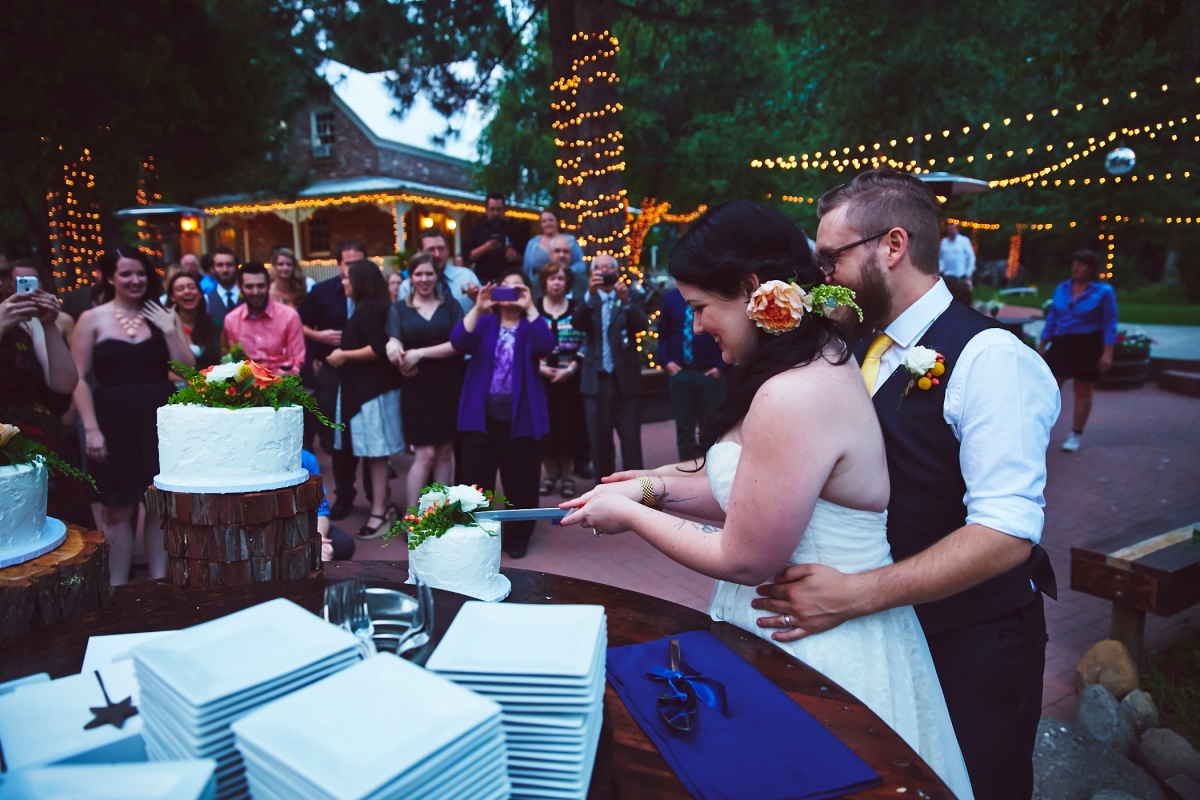 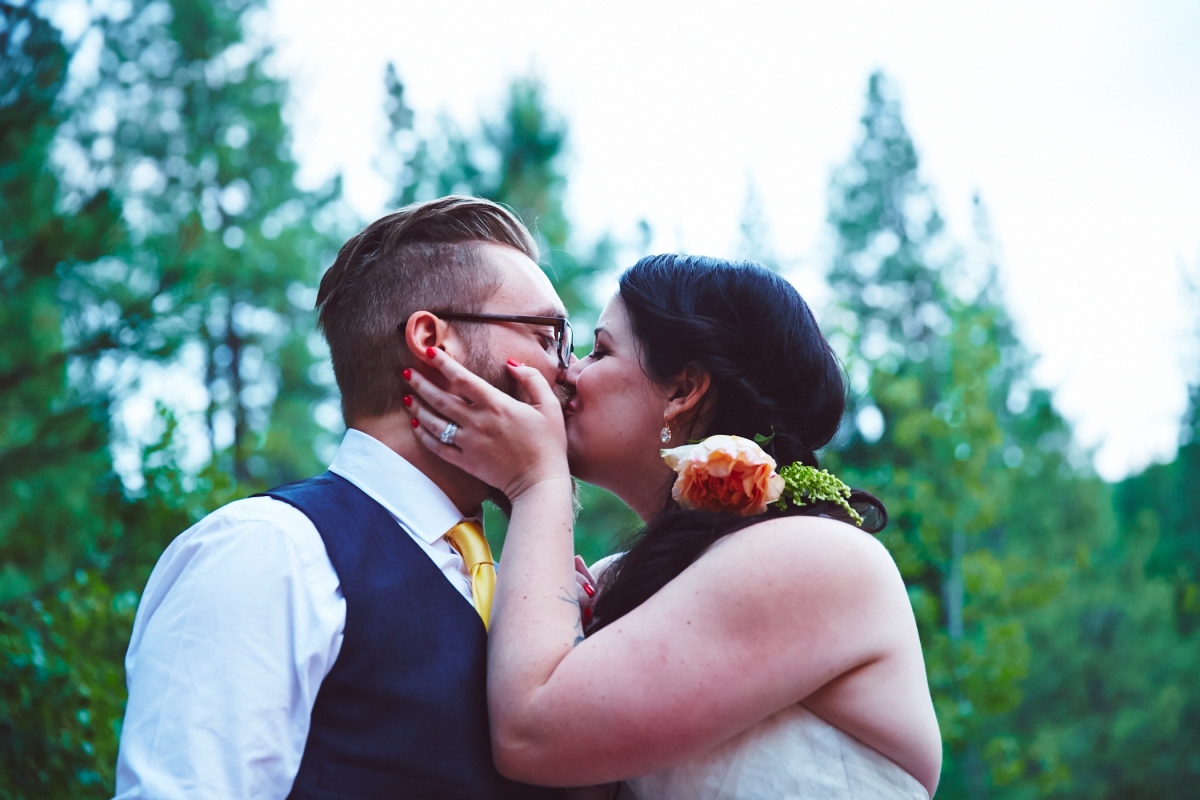 The sun was officially set not long after dessert, and the party raged on! The whiskey flowed, the music blared, and my friends got silly… 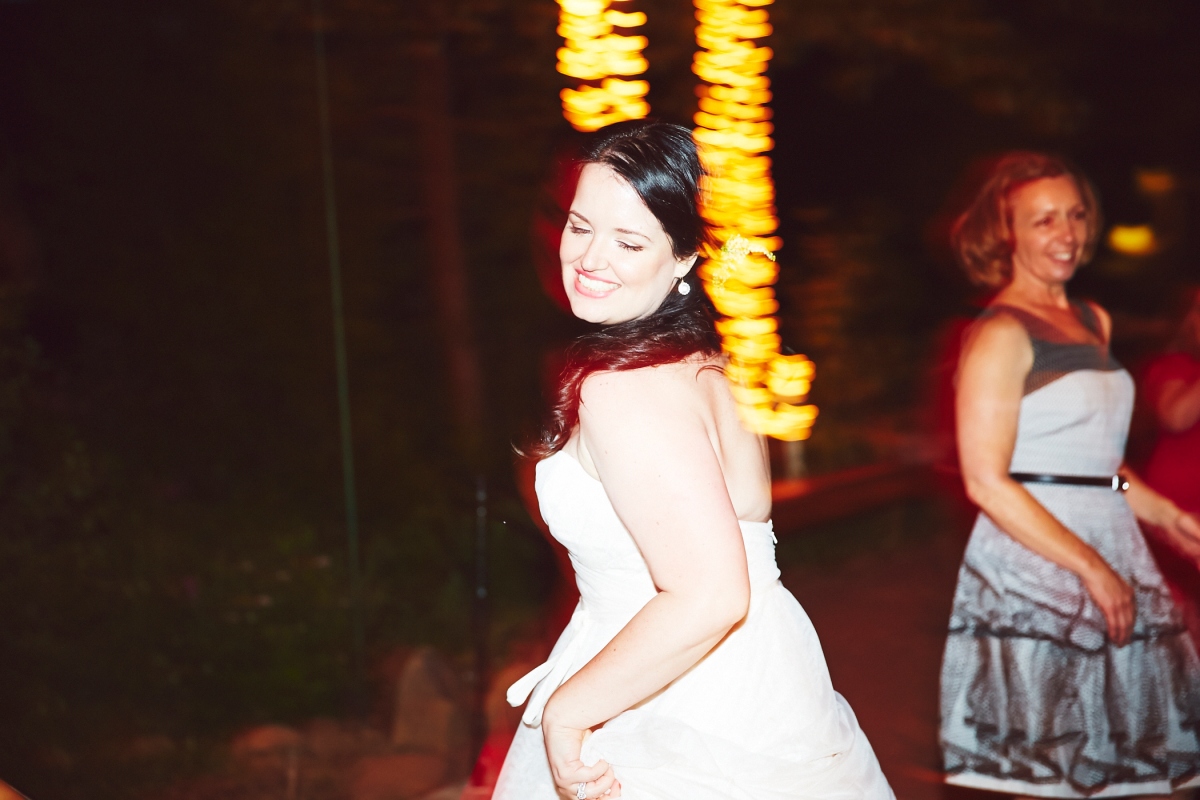 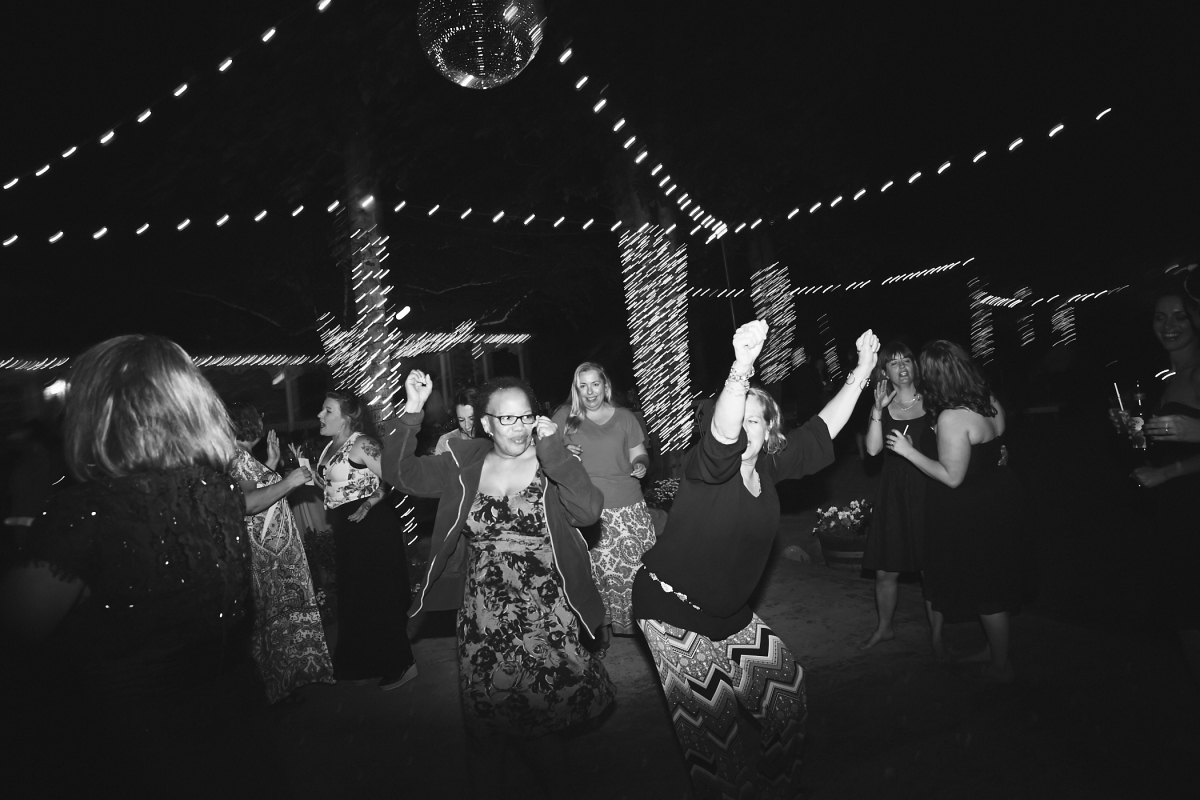 (I swear no punches were actually thrown at my wedding!)

Around 10:30 p.m., our caterer served up late night munchies in the “General Store” (a room just off the reception area where the buffet had been set up). Snacks included BLTs, grilled cheese, and tri-tip sandwiches.

I was in Heaven because this was the first real food I’d eaten (I only nibbled on dinner) the whole day! 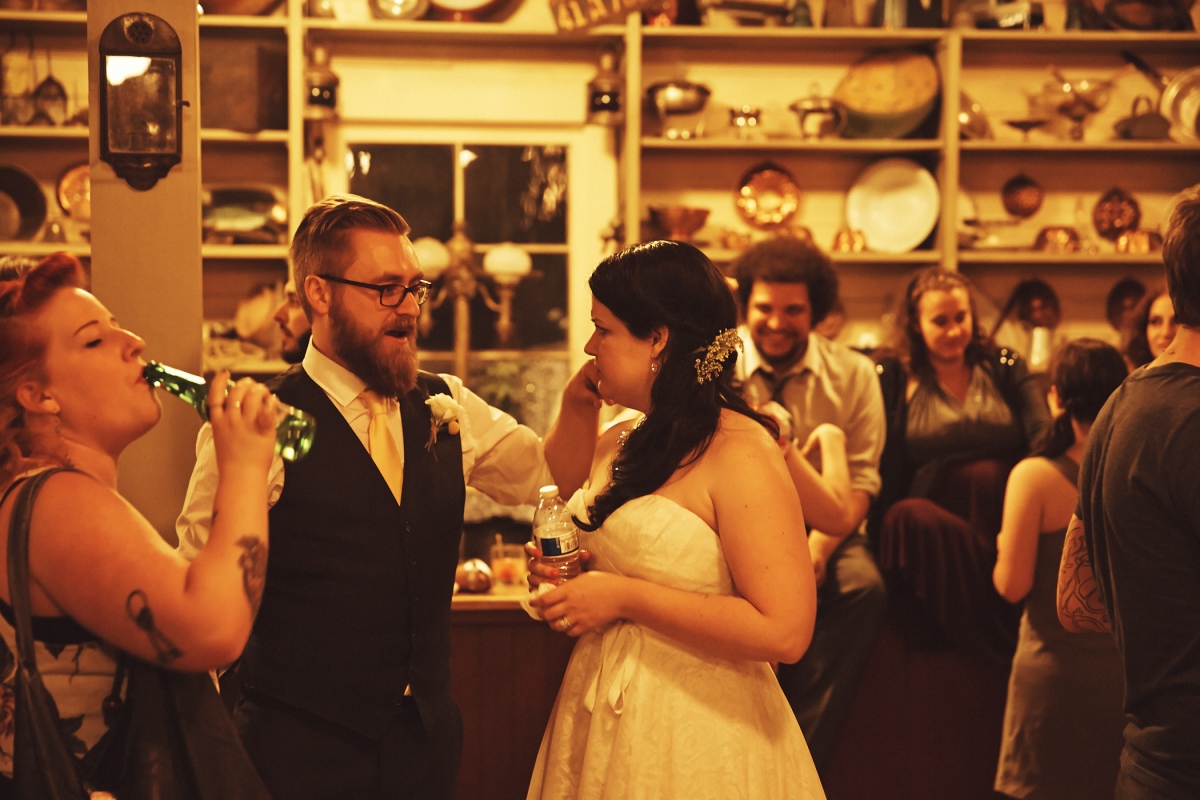 A short time after refueling, things began to die down; the dance floor became less full and the crowd more sparse. Friends and family, one by one, retreated to their hotels, giving us kisses and hugs as they left. It was this relieving and gradual lessening of energy, like I was slowly, finally, letting out a huge breath I’d been holding. 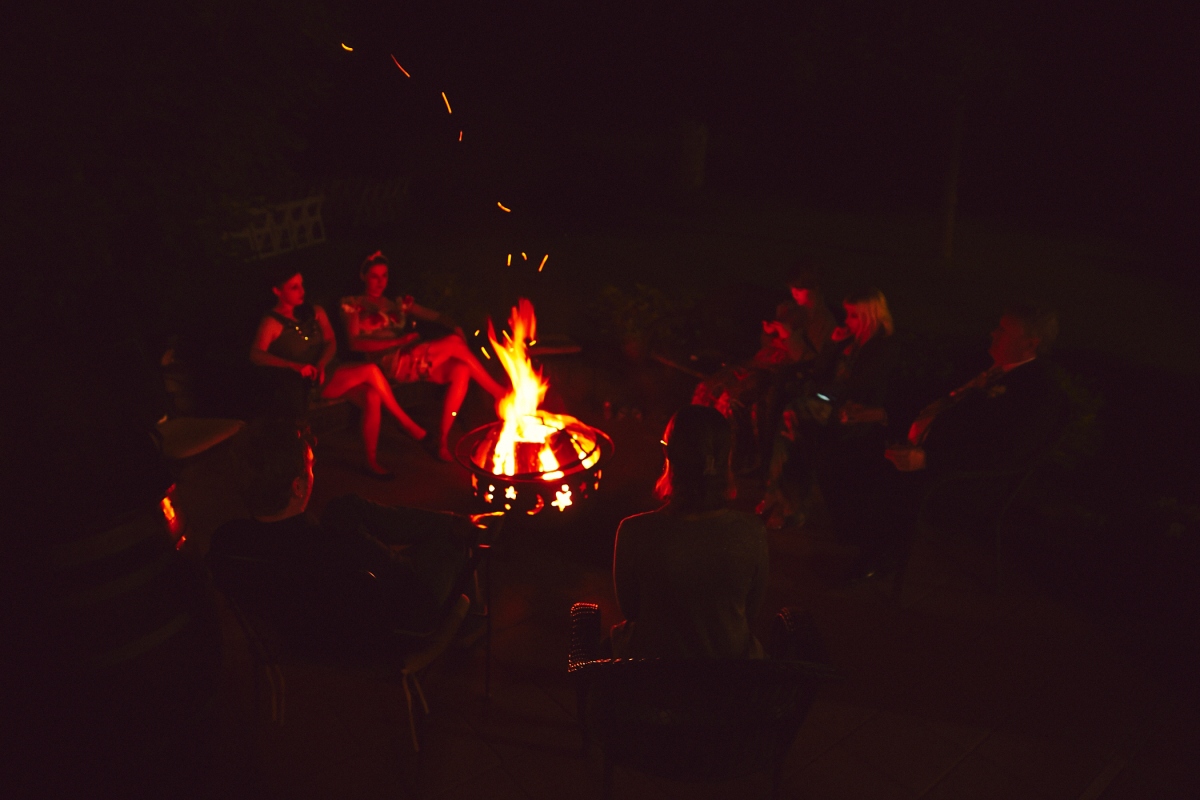 A handful of people remained when Jonathan and I took to the dance floor one last time. I felt pure, unadulterated joy, and it made all the planning, money, stress, and time that went into this wedding worth it.

If you’ve actually made it to the end of this post — THANK YOU FOR READING! I’m blessed to have the opportunity to share this meaningful event with you and hope you enjoyed following along!

And to Jonathan: Thank you for picking me to be your wife. I would marry you all over again, big fancy wedding or not. I love you to the stars and back.

Psst… in case you missed this week’s series on our wedding: the venue, design + decor, getting ready, the ceremony, and Jonathan + me.

One thought on “Our Wedding: The Reception”

First Fig
My candle burns at both ends ;
It will not last the night :
But ah, my foes, and oh, my friends—
It gives a lovely light !

Second Fig
Safe upon the solid rock the ugly houses stand :
Come and see my shining palace built upon the sand !